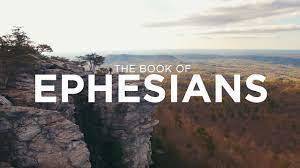 The New Testament writing of Ephesians features powerful and poetic language celebrating the life of the early Church, and the union of all believers, both Gentile and Jew, within the body of Christ, with Christ himself as the head. Believers have been reconciled to God through the death and resurrection of Jesus, and distinctions of race and ethnicity are muted in favor of the new common identity of Christian discipleship.

Some interesting aspects of Ephesians:

• Author: Although the salutation of this writing indicates it is from the apostle Paul (1:1a), many biblical scholars think that this writing was actually made by the hand of a second generation Christian from a church community established by Paul, rather than by the apostle himself. As such, Ephesians is sometimes put into a category of writings in the NT referred to as “deutero-Pauline”. This distinction does not lessen in any way the validity, canonicity, authority or value of these writings for Christians and for the Christian church. It simply reflects the development of the early church and its interpretation and expression of the faith.

• Recipients: Ephesians is widely regarded as a general letter originally intended to be circulated to several churches in Asia Minor. The naming of “the saints who are in Ephesus” as the recipients was quite possibly a later addition to a copy of the let-ter that was sent to that specific community, in order to make its words more per-sonal to them.

• Date: This letter is most often dated sometime at the end of the 1st century, between 75 CE and 90 CE.

• Chapters 2 contains a series of affirmations emphasizing God’s reconciliation of hu-manity through Jesus, the conversion of the Christian from death to new life, and of the new unity in Christ of both Gentile and Jewish believers; (2: 14)

• Chapter 3 continues with Paul’s description of his own apostleship as a servant of God’s grace, and his fervent prayers for the faith of the Christians who would hear this letter (“I pray…” 3:13; 3:16; 3:18)

• In Ephesians 5:21-6:9 we find what are sometimes referred to as the “household codes”, describing the principles for relationships between husband and wife, parent and child, master and slave, centering on the principle of mutual subjection; “be subject to one another out of reverence for Christ” (5:21)